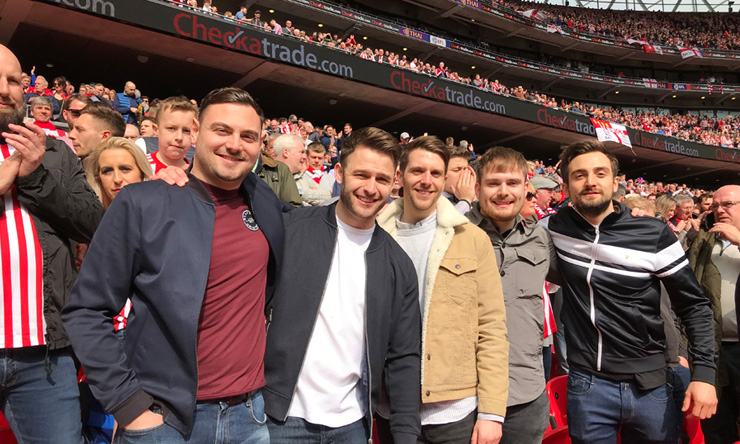 The red and white runs deep at GAS

Great Annual Savings Group (GAS) has been announced as Sunderland AFC’s principal partner for 2020/21 this week, much to the delight of the Group’s red and white colleagues.

With headquarters in Seaham, GAS employs more than 300 people around the UK.  The news that the brand will appear on the infamous famous red and white shirt next season has been met with positivity around the Group.

Groves spent the majority of his pre-GAS career running FTSE 250 companies and PLCs all over the country, including Group MD at Caudwell Group, which sold to private equity for £1.5bn. Meanwhile, Liam and Ryan grew up in Sunderland and were season ticket holders until GAS became a corporate partner of the club and purchased matchday hospitality.

The brothers both work in the Group’s Quality and Risk department and have been key players in GAS being independently awarded Total Gas and Power’s Platinum Accreditation for sales compliance in the energy arm of the business.

Liam, 29, was the Group’s first official employee in 2012 after graduating from Leeds Beckett University with a degree in business studies.  After arriving in a sales role, he joined the Group’s self-regulating Compliance department.  Several progressions later, he leads a team of four colleagues.

He said: “We have speculated for the last few years whether we would end up on the front of the shirt and always said it would be a proud moment.

“Our family are Sunderland fans and I have gone to matches with my uncle and grandad since I was a child, long before the birth of GAS.  My earliest memory is when we beat Chelsea 4-2 away from home.  It was a masterclass from Don Hutchison and cult hero Patrice Carteron made his debut.  Fantastic memories.

“The club is the beating heart of the city and it hurts to see it in League One.  You feel like it’s the supporters who will help drag us back to where we belong and hopefully we can take a step towards that this season with the family business on the front of the shirt.  That would be special.”

Younger brother Ryan, 27, has also spent his entire career with the Group.  He completed his degree in business management at the University of Manchester before joining the HR department at GAS.

After a change of career, Ryan has now carved out a position in the Quality and Risk Team alongside Liam.

He said: “We work with sporting clubs of all levels, from pro teams to grass roots.  A football stadium houses bars, retail, ticketing, offices, hospitality, events and some even include accommodation.  They are always exciting, diverse organisations which offer opportunities to generate savings.

“We all felt a responsibility working with Sunderland as our club, which we have loved for decades.

“It’s going to be a great feeling to see our brand on the shirt.  It will feel like a piece of our family on there.  I know Craig [Shields, Head of Quality and Risk] and Adam [Brown, Group Marketing Manager] have worked with the retail team at the club and put a lot of effort into making sure the logo complements the shirt design and they are both pleased with the outcome, as are the club.  I’m looking forward to seeing it revealed.

“We are never the easiest team to support, but Sunderland has still given us some amazing memories and it would be a dream come true for many of us here if we could make some more with GAS on the shirt.”

Liam and Ryan will be contributing to forthcoming community initiatives, which are being prepared in partnership with the club.  GAS was inspired by Sunderland supporters’ charitable work in 2019 to assist the city’s foodbanks and is looking to help families in the area who may be struggling as a result of the global health crisis.  More details will be revealed about this in coming weeks.

Corporate Social Responsibility (CSR) is a key concern for the Group’s senior leadership and GAS staff have already raised an incredible £160,000 in the last three years for North East charities.  Liam has raised one of the highest totals of anyone at the Group.

“Ryan and I certainly don’t benefit in terms of expectations with our Dad being the Chief Executive.  We are rightly expected to set an example.  If you ask anyone at GAS, they’ll confirm that we are given shorter shrift than anyone when it comes to performance in the workplace and our contribution to the CSR total.

“Last year I was pulled out as winner of a Christmas raffle draw and my Dad threw my name back in the hat.  There are no easy rides here!

“We’re all itching to get along to the first match we can when restrictions are lifted.  The club wants to connect further with supporters, and I think having a company with its roots in the area as principal partner is a step in that direction.”

Who knows when the new season will actually start or when supporters will be allowed back into the Stadium of Light.  But, we know for sure that when that happens, GAS will be there in force, roaring the team on.